Back in 2018, Gen-Zers all across the country began experimenting with a fledgling video app for dancers, singers, and cosplayers called TikTok. One of them was a doe-eyed, freckle-nosed Connecticut high-schooler obsessed with Dunkin' Donuts. By now you've probably heard her name: Charli D'Amelio.

Two years and 2 billion downloads later, TikTok is the most popular app on the planet and 16-year-old Charli, who has more than 100 million followers, holds court as its undisputed Queen. (In recognition, Dunkin' named a caramel cold brew in her honor.) The teenager's unlikely ascension cemented both her and her family's reputations, first as social media superstars, and then as unstoppable forces in the entertainment industry. This summer, Charli's 19-year-old sister, Dixie, released the hit single "Be Happy," and their dad, Marc, revealed plans to build a "D'Amelio media company." Charli and Dixie's "momma," Heidi, is currently using her newfound fame to raise money for victims of Hurricanes Laura and Zeta.

All together, the digital dynasty's four ring light circus has the biggest tent on TikTok, which helped pave the way for a YouTube channel, several lucrative brand partnerships, and a forthcoming family reality TV series à la the Kardashians.

Charli and Dixie both credit their family's success in large part to unofficial momager Heidi, who oversees business deals and dishes out advice behind the scenes. "I always know she 100 percent has my back and is in my corner," Dixie tells ELLE.com.

When we connected via Zoom this fall, Heidi admitted that she worries about her girls and their meteoric rise to fame but hopes a reality show will give them "a little bit [more] control over what's being said about us." In our exclusive interview below, the First Mom of TikTok talks about her "tough" parenting style, the art of the social media gut check, and the "many, many" emotions that come with social media stardom.

On being the "tough" parent.

"There were a million things I wanted [the girls] to do growing up... but at some point you just have to say, 'It's too much.' We allowed Charli and Dixie to figure it out and see what [activities] they liked and didn't like. I remember Charli told me, 'I want to be an ice skater.' She was four. The next day, I signed her up for lessons. We were at the rink and she said, 'Where's my tutu?' I'm like, 'No, you have to wear snow pants and a helmet!' She said, 'I don't want to do this.' But I made her stick with it. I told her, 'You're going to do the rest of these four weeks.' I was tough on them."

"We allowed Charli and Dixie to have social media [when they were younger], so that they could message their cousins in Louisiana. It was scary, because you hear about all the bad things that can happen online. Marc and I monitored the time they spent on their phones, and when it came to Instagram and posting, they'd ask us, 'Mom, do you think I should post this?'

"You are a brand in your own right, you are a human. This is what you stand for."

They still check with me [before posting to social media] all the time. They're like, 'Should I post this?' Whether it's Instagram or TikTok. I turn it back on them, like, 'If you're asking me this, what are your concerns?' Marc would say, 'Is that good for your brand?' You are a brand in your own right, you are a human. This is what you stand for. This is what you're about. So we wanted Charli and Dixie to think about whether what they were posting represented their brand."

On knowing when to take down posts.

"Sometimes, Marc and I make the girls take down [social media posts]. We're like, 'No.' Whether it's the light, the lip synching of the words... It's tough. We have to look at it like they [are playing] a character... Charli has been dancing since she was really young, and when she turned 13, she started taking the train into New York City [for dance classes] with 25 year olds [dancing] to the music they listen to now. So it was always just the part of the creative, it wasn't like, 'I'm going to live this life that the lyrics are talking.'"

Heidi, at home, tells ELLE.com she hopes a reality show will give her "a little bit more control" over what’s said about her family online.
Courtesy Heidi D'Amelio

On the next D'Amelio frontier: reality television.

"We haven't started filming [our show] yet. The groundwork is still being put together, but from what I understand, because we've never done this before, once it starts, it's really going to take off. We've had conversations about filming and when the cameras are and are not going to be around. I don't know if I have a fear about [doing a reality show], we're all happy to let people see us and see who we really are.

"People think they know us and what we're about, but they don't."

People think they know us and what we're about, but they don't. What they see on social media in little bits is not all of who we are. People just hate on others for no reason. If you knew them and you really had a conversation with them, would you really hate them that much? Maybe, but maybe not. And that's fine. Not everybody's going to like everybody, I get that, but at least get to know us. And so right now, I don't think I have a fear, because we've had a lot of conversations with the production company about what it's going to look like. Anything new is a little bit scary, but our whole life is new, so why not? Every time we walk out the door, we're being filmed. So to have a little bit control over what's being said about us and who we are is important for us." 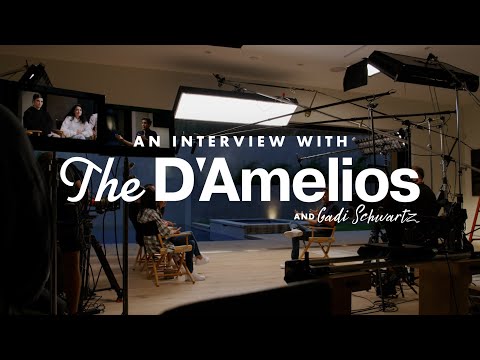 On daily life during the pandemic—and a newfound appreciation for family time.

"We all have a schedule that we share, so at night I'm like, 'Is everybody's good with their first thing in the morning? You know what time you have to get up?' The first thing I do when I wake up is get the dogs outside and fed. Then I get myself ready, because there's usually people in the house shortly after that. Four days a week, Marc and I go to the gym. Charli and Dixie get their coffee and get their day rolling. Charli likes to do some skincare and brush her hair. Dixie shows up a little Dixie-ish; she doesn't care. Then I [assess] their many, many emotions [based on] what happened after they woke up and checked their phones. I'm like, 'All right, you're going to be okay,' kind of talking them through [the dramas of the day]. It's always a roller coaster. You never know. They will wake up and either be in a great mood or not. It's a lot of emotions [in our house], but they're teenagers."

On self-discovery during quarantine.

"The most surprising thing I learned about myself during quarantine is how much I wasn’t appreciating the little things that are around us, like the beautiful sunsets, the smell of flowers, and the sound of the birds. I realized how much being caught up in life prevented me from appreciating the natural world around me and how important it is to be grateful daily."

On ice cream—and why it's the best escape from reality.

"Sometimes we'll just say, 'Hey, let's go take a ride and get ice cream.' That's our family time. Marc is king of being like, 'Let's just get on out of here and go do this.' We get in the car, just the four of us, and listen to music—from country to hip hop to old school to '70s—and ride around. Marc loves to ride around in the car. Those drives are sprinkled in between filming videos and meetings. We try and find calm throughout the day, which, as a mom, is always the goal."

"We had Charli’s favorite pasta from Il Pastaio [in Beverly Hills], and just spent time together as a family listening to music, singing, dancing, and hanging out."