In ELLE.com's monthly series Office Hours, we ask people in powerful positions to take us through their first jobs, worst jobs, and everything in between. This month we spoke with CNN's Abby Phillip, whose powerful on-air prose about Donald Trump and Vice President-elect Kamala Harris—"Donald Trump's political career began with the racist birther lie, but it may very well end with a Black woman in the White House"—made waves during election week.

On falling in love with journalism

Journalism wasn't on my radar growing up. My parents are immigrants, so it was like [you can be a] doctor or lawyer. But I couldn't do the whole be in a lab for hours and hours on end thing. It wasn't until I got into Harvard and started writing about politics for the student newspaper, The Crimson, that I fell in love with journalism. I thought to myself, I should just keep doing it for as long as I can and see how far this goes. 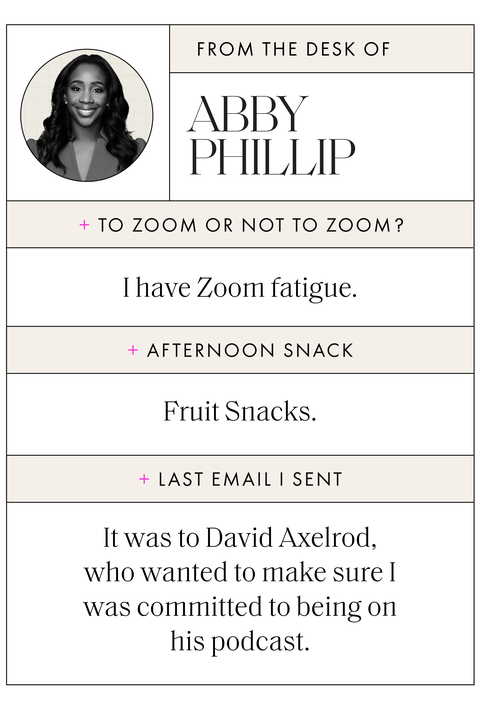 The first story I reported

I couldn't tell you the exact angle, all I remember is that I interviewed David Gergen, who is still a professor at the Harvard Kennedy School. It was my freshman year of college, around the time of the 2008 presidential election, so it had something to do with that. I was starstruck with the whole process, and getting the chance to interview someone who had worked in the White House. It made me realize, wow, I love talking to people about politics and getting the stories of those who were in the room. Now I'm on CNN with David all the time. It's cool to work with people who are pivotal to American history. It feels full circle.

My parents are, to this day, big cable news watchers. My dad always had CNN or MSNBC on when I was growing up. We watched a lot of Hardball with Chris Matthews. I also really admired Gwen Ifill. She was a huge idol for me. I always saw myself in Gwen. She was the gold standard for me when I became a journalist.

On late nights during election week

There was no work-life balance during election week, let's just put that out there! It was all work. But sometimes it's just like that in journalism. All you can do is get through it and give it your all. My husband Marcus really stepped up. We have a dog named Booker T. and Marcus took care of him, because I wasn't home very much. 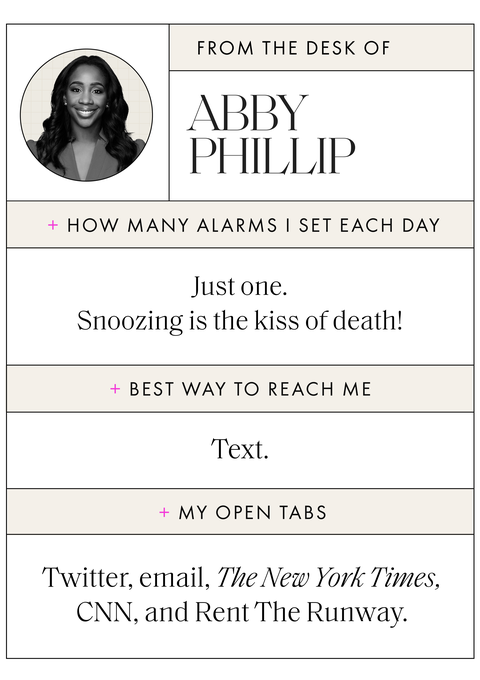 I have pretty sensitive skin, so exfoliation is key to keeping my skin happy, especially given how long I need to be in television makeup during a typical work day. Right now, I’m very into micro needling for skin rejuvenation with not that much down time. I also love a good skin oil, like Marula oil. Learning how to embrace oils has been a revelation.

People I look up to have always pushed me to make myself uncomfortable. It's the single most important piece of advice I've ever received, and it's the advice I give to other people. You should never get too comfortable where you are and with what you're doing. You should challenge yourself and scare yourself a little bit. When I first made the leap from print to television, I was terrified that I was making the worst mistake of my life—but that wasn't the case. If you feel afraid to take the next step, it's probably a sign you should do it.

Music critic. I grew up in a very musical household and I always loved instruments. I sang in high school and college, and I just love music—all different genres. I'm really obsessed with H.E.R. right now, I think she's amazing, so creative and such a savant. She plays a lot of instruments and has this incredible tone to her voice.

I love a good red dress with puff sleeves, but I also love royal blue. I can't wear that color as much, because our set is often blue and I would just blend in.

On being unapologetically ambitious

An ambitious woman is a woman who's closer to being who they're supposed to be—not one who holds back or lets others define them. Some men show ambition by throwing elbows or by trying to take up other people's space in addition to their own. I've realized over the years that I don't have to do that. I can be ambitious, and still be true to myself and make space for other people. A lot of other women do that, too, and I think the more we lean into ambition, the more we can redefine what it looks like. That can make people uncomfortable, because it's not what they're used to seeing. But I believe women should be as unapologetically ambitious as possible.

This interview has been lightly edited and condensed for clarity.

How Lo Bosworth Took Control of Her Own Narrative

Michaeline DeJoria on the Importance of Efficiency

Dr. Jane Goodall on How to Remain Hopeful

Karine Jean-Pierre on the Power of Being Shy

How Marielena Hincapié Embraces Her Background

YA Author Sabaa Tahir on How to Fight Burnout